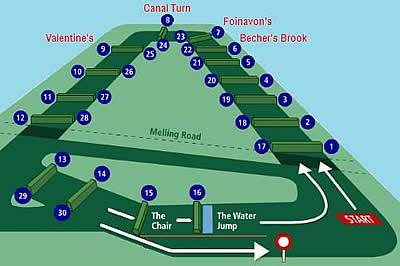 The Grand National is popular among many people who do not normally watch or bet on horse racing at other times of the year. For those of you that aren’t in the know, visit Grand National betting for the current favorites and to educate yourself in the best assistance for the best bets you can find with the best UK bookmakers.

After the Grand National Weights are announced, odds shift. Believe it or not, it is possible to apply an element of science to Grand National betting.

The bookmakers are already offering Grand National betting odds – ante post markets will cover some of the most-likely Grand National tips for the horses that head up the market. But expect the odds/pricing to change by race time!

Are you new to ante post betting? Get the low down with the Ante Post Betting Guide. Learn about different types of Grand National Betting using Tote Betting, Simple Win Betting, and Each-way betting and pick the 2019 Grand National Winner! Ante post betting in Europe is similar to advanced deposit wagering in the United States, which is a form of gambling on the outcome of horse races in which the bettor must fund his or her account before being allowed to place bets.

Only forty horses are allowed in the National race, so for the numbers above that, those horses may not make the cut and be a part of the National. The key to having an ante post bet is to find a horse that is guaranteed to make the lineup on the day. Be sure to take in account illness and injuries, last-minute dropouts. Then what about the fairytale entries?

For example, can “One for Arthur” become the first back to back winner since Red Rum, or can Richard Johnson end his streak as the unluckiest jockey in National history?

The scale of the UK’s Grand National betting activity is huge! It is estimated that if all of the betting slips from the Grand National were placed end-to-end, they would stretch all the way from Liverpool to Las Vegas and back – a distance of more than 5,000 miles!

For those that are concerned about Steeplechase deaths: equine deaths in the Grand National are higher than the average steeplechase, with six deaths per 439 horses between 2000 and 2010. Due to the high number of injuries and deaths suffered by participating horses, animal rights groups have campaigned to have the race modified or abolished.

After two horses died in the 1989 Grand National, some of the National’s most challenging fences have been modified, while still preserving them as formidable obstacles. Also, changes in setup and procedure allow veterinarians to treat horses more rapidly.