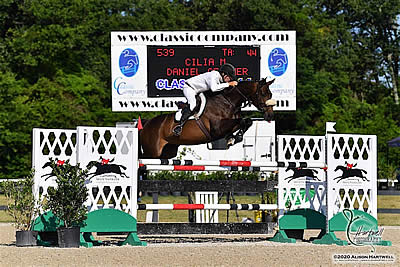 Daniel Geitner and November Hill’s Cilia M rode away with the win in the $25,000 Aiken Saddlery Grand Prix, presented by Purina Animal Nutrition Week II of the Aiken Summer Classic, besting a field of twenty-eight horse and rider teams over a course designed by Steve Stephens of Palmetto, Florida.

Four rides later, Geitner and Cilia M added themselves to the jump-off roster with their clear first round in a time of 78.703 seconds. “It was a very technical course and definitely big enough,” said Geitner. “Since I had rails with my earlier rides, I was able to use that to my advantage to help navigate that first round. Cilia is still a little inexperienced and hasn’t had nearly the mileage the other horses have. She jumped really well in the first round and handled those technical questions pretty easily,” he said.

Stephens set the jump off round with a time allowed of 44 seconds. Payne and Quintessence were the first to go but a heartache rail at the last fence gave them four jump faults in a time of 39.814 seconds. Toering and Balou Moon BHF followed in the order and turned in a clear round with a time of 36.055 seconds. The heat was on for Geitner and Cilia M.

The pair turned in clear round and galloped through the timers in 34.804 seconds. “She was on her game,” said Geitner, “and to be honest, she’s been a bit of a hard luck story and I’m glad she pulled through,” he added.

Madeline Reich of Birmingham, Alabama and Lyons Creek Sporthorses, LTD’s Harakiri Z placed fourth with their first round performance with one time fault in 83.070 seconds.

Geitner and Oak Ledge Farm’s Fazous also picked up the fifth place as the fastest of the four-fault first rounds with their time of 75.012 seconds and also earned a sixth place with November Hill’s Vesta De Lavardin for their four fault first round in a time of 75.734 seconds.

Catogi, owned and ridden by Grant Seger of Aiken, South Carolina, finished in ninth place for their four fault first round in a time of 78.330 seconds. Tenth place was awarded to Kris Killam of Naples, Florida aboard Empire Show Stables’ Boreale De Talme and eleventh went to Kyle Dewar of Ocala, Florida and Joan Burke’s F Gunsmoke RHF. Jamie Gibson of Ocala, Florida and Lucky Horses, LLC’s Caddie R wrapped up the class with a twelfth-place finish.