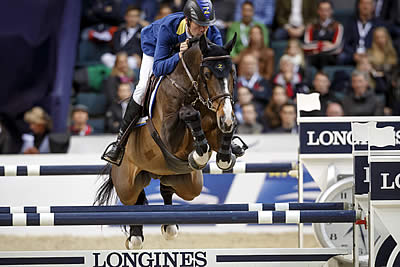 Ahlmann and the brilliant 16-year-old stallion, Taloubet Z, set the standard in the seven-horse jump-off against the clock and couldn’t be caught, but Ireland’s Denis Lynch rocketed up the leaderboard when producing the only other double-clear of the competition to finish second ahead of The Netherlands’ Harrie Smolders and Emerald in third, while Guerdat and Corbinian slotted into fourth place.

Marcus Ehning finished fifth with Cornado NRW to keep the potential for a record-breaking fourth series title still very much alive for this popular German star, while his compatriot Marco Kutscher lined up sixth with Chaccorina ahead of America’s Peter Lutz and Robin de Ponthual in seventh spot.

Course designer, Santiago Varela from Spain, increased the degree of difficulty with today’s tough first-round track that tested power, accuracy, rideability and courage. The triple combination at fence eight proved influential, but it was the line from the oxer at 11 to the vertical at 12, the following water-tray oxer at 13 and the final vertical at fence 14 that decided the fate of many. Horses that jumped big at 11 often arrived deep at the tricky vertical at 12 with its gold-coloured poles offset by a rocking horse fence-filler. And some also put their eye on the water-tray under the penultimate oxer at 13 to put themselves out of contention as they rode down to the last.

There were no clears until Ahlmann set off, ninth of the 33 starters, and the pure class of the round he produced from the stallion with which he won the FEI World Cup™ Jumping title on home ground in Leipzig (GER) in 2011, always suggested that today he would be the man to beat.

First to go against the clock, he again just cruised home in 36.85 seconds without appearing to be under the slightest pressure, and although Lynch also left all the fences intact with his stallion All Star who has been in the form of his life in recent months, he seemed to have left the door wide open for those following him when stopping the clock in 41.42 seconds. But as it turned out, none of the rest could leave all the fences in place, both America’s Peter Lutz and Germany’s Marco Kutscher collecting eight faults while Harrie Smolders lowered the oxer at fence two, now the third-last obstacle on the track, and then Marcus Ehning clipped the second element of the double at fence three and the penultimate vertical to put paid to his chances.

Guerdat looked set to threaten Ahlmann’s lead when last to go, but the crowd gasped when Corbinian hit the opening vertical. When asked afterwards if this unnerved him and made him change his plan, the Swiss rider said, “No, I just wanted to make sure I didn’t have another fence down, I wasn’t going to catch Christian anyway so I was going for second place. That was the plan – it was never about winning the class today; it was to be in the lead tonight. The championship overall is more important than a single class,” he said wisely.

One of the favourites

Ahlmann was one of the firm favourites to take the 2016 title before the Final got underway, but he was lying well down the leaderboard after two mistakes with Colorit.

He talked about his disappointment when things didn’t quite go his way in the first leg. “The plan was a little bit different, but it’s the sport. I tried to take one day (of jumping) off Taloubet and to use another horse, it was a risk but not a big risk because he did well over the past few weeks, but yesterday was not our best day, and at the end two down left me in 25th place. It was a really bad start, but this is a championship and the possibility is still there and we had a very good second day apparently!” he pointed out.

Talking about his plan for the jump-off, he said, “I sure wanted to go fast; I have a really fast horse, an unbelievable horse and my only chance to move forward in the rankings was a good result today so I had no other option – so I tried to put my colleagues under pressure and it worked out!”

He now lies joint-10th alongside Irishman Lynch and America’s Lutz going into the final afternoon and well within sight of that coveted Longines FEI World Cup™ trophy.

Reason to be pleased

Lynch, meanwhile, also had every reason to be pleased. “My horse (All Star) is not a very quick horse, but today I was lucky because my colleagues had fences down so I finished second. I’ve taken a long time with this horse. I’ve had him since he was six years old and he likes playing around, bucking and messing a lot, so he’s not always that easy, but we know each other really well now,” he said of his 13-year-old stallion. “And he’s been in great form since December and through January and February with lots of good rounds,” he added.

Harrie Smolders admitted that his stallion, Emerald, is also feeling pretty good, in fact so good that he very nearly unseated his rider in the first round today. “He jumped just amazing, almost too well in the first round – I almost came flying off but luckily I stayed on him! I knew I needed a top place today to be in touch for Monday so I’m pleased with how it has worked out, and now I’m waiting for Monday,” he said.

Guerdat, meanwhile, reflected on how things have fallen in place for him over the last two days. The possibility of taking his second Longines title in a row looks very much on the cards.

A lot of questions

“I’m really happy. There were a lot of questions before the Final started that I really didn’t know the answer to… my horse has lot of ability; he has quality and he will be a very good horse one day, but we are still a bit looking for each other and I didn’t think he would be good enough to be in the lead before the final day,” he pointed out. But the defending champion is not getting too carried away with it all just yet. “It was just another day today; I’m going to enjoy myself tomorrow and I’m really looking forward to Monday now!” he added.

Talking about his horse, Corbinian, he explained, “He’s done quite a few big classes with me just we haven’t been so much in the results; we’ve had a lot of four faults and sometimes eight faults, never really because of a lack of quality but because I can’t get to his quality. He’s a bit difficult to ride for me; I did two or three nations cups last year and maybe four or five five-star Grand Prix classes and he was very good in the World Cup in London. I felt then he was the horse for this final; I had the luck to be already qualified so I didn’t have any pressure to get the points.”

Guerdat also made a joke at his own expense as the post-competition press conference was coming to a close. When asked what made him decide to come back for the jump-off knowing that there are two more rounds of jumping and that he might already be leading the standings, he replied, “I’m not that good at calculating, but I thought if I don’t mess it up completely I would be in the lead, but I wasn’t exactly sure – I’m here for the sport and not the mathematics!” he said.

When it comes to the crunch on Monday, however, it looks very possible that the Olympic gold medallist and defending Longines champion may well have the last laugh.

The winner was Germany’s Christian Ahlmann riding Taloubet Z, the horse with which he won the FEI World Cup™ Jumping title in Leipzig, Germany in 2011.

However, it is the defending champion, Switzerland’s Steve Guerdat, who heads the leaderboard going into Monday’s third and final competition when adding a fourth-place finish to his fifth place in the opening Speed class.

A total of 13 horse-and-rider combinations picked up four faults in the first round.

America’s Katie Kindan was eliminated for two refusals for Nougat du Vallet in the first round, and fellow-American Charlie Jacobs retired with Flaming Star.

The bogey fence in the first round was the vertical at fence 12 which consisted of two gold-coloured poles with a golden rocking-horse as the fence filler.

The top 30 riders after today’s competition will qualify for Monday’s third and last competition, and 20 of those will advance to the second round.

Any riders who jump clear in the first round, even if they will finish outside the top 20, are also permitted to go again in the second round but their result will not count for the final classification.

Santiago Varela, Course Designer: “I want to congratulate all the riders; they rode really well and it was a nice competition. I feel good about how it went.”

Christian Ahlmann GER (1st), when asked about the formula for keeping Talboubet so fit and competitive five years after winning the Longines FEI World Cup™ Jumping title with him in Leipzig: “It’s nothing special; I just think you need a real Ferrari like him and it makes it a bit easier!”

Steve Guerdat SUI (4th), when asked if he thought he could repeat his winning performance of last year: “We’ll see; I’m delighted to have so many good horses and I can definitely ride better than I did in the final last year!”