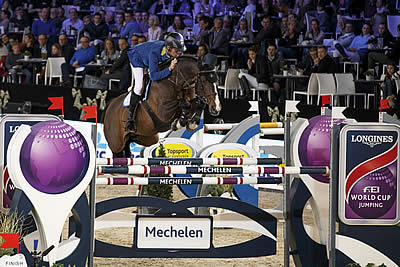 Mechelen (BEL), 30 December 2015 – Germany’s Christian Ahlmann galloped to his third victory of the season at the eighth leg of the Longines FEI World Cup™ Jumping 2015/2016 Western European League at Mechelen in Belgium. The competition came down to a 10-way decider against the clock, and, third-last into the arena, the 40-year-old rider and his brilliant 15-year-old stallion Taloubet Z produced another of their trademark thrillers to seal the result in style.

On a day when the focus was otherwise on all things Belgian, however, home riders filled three of the top four placings and five of the top ten slots. Niels Bruynseels threw down an extraordinary jump-off performance with the nine-year-old Cas de Liberte to claim runner-up position, while Jerome Guery lined up third with Papillon Z. And fourth-placed Jos Verlooy has rocketed up to second spot in the Western European League standings after finishing fourth this evening with his nine-year-old gelding, Sunshine.

With 77 points now to his credit, Ahlmann has a 26-point lead over Frenchman Simon Delestre at the top of the series leaderboard with just three qualifying legs left to run. So along with Verlooy, Penelope Leprevost from France and young Belgian star Nicola Philippaerts, the 2011 FEI World Cup™ Jumping champion is well-qualified for the 2016 Longines Final which will take place in Gothenburg, Sweden in March.

Belgian course designer, Lucien Somers, set them a tough task with tall verticals, wide oxers and obstacles coming up at a rapid rate around his 13-fence track. This was no day for the faint-hearted, with absolute commitment required from horse and rider from start to finish, and Verlooy showed all of that when opening the class with a great clear from his relatively novice gelding.

There were consistent errors at the oxer at fence four, but the majority of mistakes were made along the line that followed, from the double at fence five – vertical to oxer – which led on a right-hand curve to the vertical at six and then on a left-hand bend to a big oxer at fence seven. The skinny planks at 11 also fell frequently, as did various elements of the following triple combination which consisted of a triple bar and two verticals before the last demanding turn to the final oxer which also took its toll.

A total of 10 found the key to the challenging track, but before the jump-off began there was an emotional tribute to Belgian jumping legend Ludo Philippaerts who retired from competition this year. During his stellar career he competed at four Olympic Games, three FEI World Equestrian Games, 11 European championships and in 13 FEI World Cup™ Jumping Finals. Amongst his many achievements, Ludo took individual European silver in 2001 and, with the great stallion, Darco, claimed European team gold in 1991. Yolande Wauters, wife of the late Eric Wauters who, 35 years ago, founded the Mechelen event which is dedicated to his name, made a special presentation to Ludo today, as did FEI President Ingmar De Vos.

With five Belgians into the jump-off, the home crowd had plenty to keep them on the edges of their seats, and they roared with excitement when Verlooy, who just turned 20 earlier this month, set a superb target when clear in 42.09 seconds. But it was Niels Bruynseels who really set the competition alight when, three horses later, he blazed through the timers in 39.37 seconds to put it up to the rest of the field.

His compatriot, Jerome Guery, has established a great bond with the former Gregory Wathelet ride Papillon Z and the grey raced home to slot temporarily into second place when crossing the line in 40.57 seconds. Ahlmann and Taloubet Z, however, followed that with a jump-off master-class, working in perfect harmony and taking a stride out on the gallop to the last to shave 0.15 seconds off Bruynseels‘ target.

There were still two left to run, but when Great Britain’s Laura Renwick and the ever-more-promising Bingtang ll posted their clear in 42.47 seconds that would slot them into fifth place leaving only 2014 Longines champion, Daniel Deusser, left to challenge. The German rider who lives in Mechelen hit the last fence in a valiant effort with First Class van Eeckelghem and had to settle for sixth place.

Ahlmann admitted that he was feeling “quite confident” going into today’s jump-off. “Taloubet did a great job in the first round and gave me a super feeling – when he’s in that shape I can ride fast and take the risks. To be honest, he just played with the fences today – he has produced some really great rounds over the last few weeks, but this one was possibly the best!” he said.

Runner-up Niels Bruynseels said he wasn’t in the least disappointed with such a close second place. “No, I’m very happy; my horse is only nine and this was her first World Cup. It is a dream for every rider to win a competition like this in their home country but it was very close, and with Christian to come I knew it wasn’t over. Maybe if I made one stride less to the last – who knows?” he mused afterwards.

Following his victory with Codex One in Stuttgart in November which was quickly followed by another with Taloubet Z a week later and now his third success today with the same great horse, Ahlmann will be one of the hot favourites when the 2016 Longines Final gets underway in Gothenburg in three months’ time. He’s already looking forward to it, but is no hurry to decide which of his brilliant string he will take to the Swedish fixture.

It could be Taloubet Z, but first the stallion will take a well-earned break. Asked this evening about restoring the horse which earned him the coveted FEI World Cup™ Jumping trophy four years ago to his best after a long injury break, the German rider said, “It’s always a big challenge for the whole team to keep horses fit for many years, and to bring him back now in such great form when he is almost 16 is only possible if you have a really strong team behind you. We are all very happy and very proud that Taloubet is really enjoying himself again!” Ahlmann added.

The next leg will take place in Leipzig (GER) on 17 January 2016. For details of the German fixture, visit www.engarde.de or contact Press Officer Andreas Kerstan, andreas.kerstan@comtainment.de, +49 177 75 32624.

A total of 40 riders representing 16 countries competed and 10 of those flew the host nation flag.

The winner was Germany’s Christian Ahlmann riding Taloubet Z, the 15-year-old stallion with which he claimed the FEI World Cup™ Jumping trophy at the Final in Leipzig, Germany in 2011.

This was Ahlmann’s third victory in the current series and he now holds a commanding lead on the Western European League table ahead of French rider Simon Delestre in second while his fourth-place finish today moved Belgium’s Jos Verlooy into third and leaves him well-qualified for the Longines FEI World Cup™ Jumping 2016 in Gothenburg, Sweden in March.

10 horse-and-rider combinations qualified for the jump-off.

Following the first round of today’s competition, there was a tribute to mark the official retirement of Belgian star Ludo Philippaerts during which FEI President, Ingmar de Vos, made a special presentation to the 52-year-old rider.

This was the 35th edition of the show in Mechelen, which was created by the late Eric Wauters and which continues to be staged by his family in memory of the Belgian Olympic bronze medallist.

Christian Ahlmann GER (1st) when asked if the round produced by Niels Bruynseels looked almost unbeatable: “I knew I had the best horse and the fastest horse. Niels also had a great round so I tried to do almost the same but be a little faster and it worked!”

Jeromy Guery BEL (3rd) – “It’s been a great season and my horse, Papillon, is amazing! I’m just really happy to have a great result in my home country – I’m surprised, motivated and delighted today!”

Peter Bollen, Mechelen Event Director: “It was very nice to see Belgian riders doing so well, and I’m very happy with a win for such a great star as Christian.”

Peter Bollen, when asked about the challenges facing the Organising Committee ahead of this year’s event: “It wasn’t easy, the arena changed ownership but new contracts were signed a week ago for another five years so all is good, and we’ve had a fantastic crowd this year – even better than last year!”

Christian Ahlmann GER (1st), when asked about training a horse like Taloubet who does not have the biggest stride: “The strides of my horse in general are fast; even if he is doing the same strides as other horses he would still be faster than them. However, I can do that (take a stride out) only once during a round; otherwise he’ll get flat and lose the jump, so I saved it for the last jump today, and it worked out really well!”

Christian Ahlmann GER (1st), when asked if he knew he had won after his brilliant jump-off round: “You can’t think like that with Laura (Renwick) or Daniel (Deusser) following you. They can always beat you; today was difficult and the chance is always there, so I had to wait until the last fence was done!”