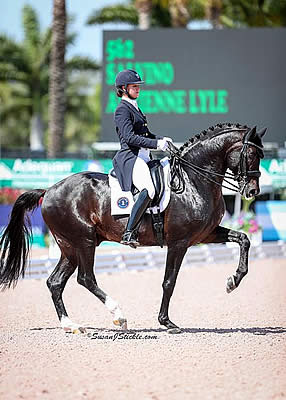 Salvino was purchased for Lyle two years ago, after the retirement of her WEG and 2012 Olympic mount Wizard.

“This idea was born to work on syndication to buy horses for high performance riders who were out of a horse to ride,” said Lyle, “and Salvino came about after five long trips to Europe to look at horses. We found him as an eight-year-old and he showed some talent, but that was by no means confirmed at the time. We stayed out of the ring last year, just spending the time that it takes to get to know a new horse. We spent the time training and strengthening, and I think that it paid off because he seems to be going in there happy and calm, and that is our main goal.”

The pair has been competing nationally throughout the winter, and made their 2017 debut in the international ring earlier in the week.

“I think he loves the international ring,” she continued. “He doesn’t seem fazed by the environment at all. He’s not really an anxious horse, and he really stepped up to the plate for me today. We are still working on some things, such as putting the piaffe more in one spot, as well as more power in the extensions. Bit by bit it’s coming along, and I’m really thrilled with him today. It was a great score and a great effort, and I think there is a lot more in him still.”

Later in the afternoon, 19-year-old Matute and Dhannie Ymas, a 2007 Hanoverian gelding (Don Crusador x Welina) owned by Yeguada de Ymas S.L., climbed to the top of the leaderboard in the FEI Intermediaire I Freestyle CDI 3*, presented by Yellow Bird Farm, with an impressive score of 75.050%.

“I was very pleased to not only finish first in the last ride of the season,” said Matute, “but also with the feeling overall. It was quite good, and I’m trying to find a balance with how much power I should ask for without losing the softness and relaxation. I believe that today with Dhannie I approached that balance well, and I believe that this ride reflected that.”

Commenting on his winter season, Matute continued, “I have four horses that I competed at the FEI level, and they all had very valuable seasons, and I think that we all progressed a lot. I have to keep in mind that these are all horses I was riding in the Juniors not so long ago. For example, last night was only Quantico Ymas’ second freestyle under the lights and two years ago, I was doing Young Riders with him. The amount of progress that we have been able to make in such a short period of time is unbelievable. It gives me goosebumps, and I’m very proud of the work we are putting in, as well as the results we are getting back out.”

For more information on AGDF and for information regarding the 2018 season, please visit www.globaldressagefestival.com.