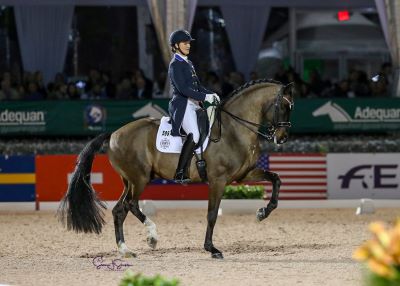 The first “Friday Night Stars” evening of musical freestyle action during the 2023 Adequan® Global Dressage Festival (AGDF) in Wellington, FL lived up to its stellar billing despite unseasonably chilly temperatures.

The week’s highlight class, the FEI World Cup™ Grand Prix Freestyle, presented by Lövsta Stuteri, produced top class dressage, personal bests on the podium, and a winning score of over 83%.

Adrienne Lyle (USA) and the 16-year-old stallion Salvino made it two for two in the Lloyd Landkamer Memorial week when they scooped the blue ribbon with 83.54% for a harmonious test brimming with expression and power. Lyle and Betsy Juliano’s Sandro Hit x Donnerhall son topped the previous day’s qualifying Grand Prix with 77.5%. In the freestyle, second placed Sarah Tubman (USA) kicked off her Wellington season with a personal best of 78.25% on another stallion, the 13-year-old First Apple, while third placed Caroline Darcourt (SWE) and Lord Django contested their first Grand Prix freestyle and pulled out a 78.17% performance.

Lyle is chasing down one of three starting places allocated to North America for the FEI World Cup™ Final in Omaha, NE in April. Her top score of 86% came courtesy of the Dutch five-star judge at H, Mariette Sanders- van Gansewinkel.

Of her performance, Lyle said, “I’m super thrilled to be here again at this amazing venue and I was happy to see how packed it was despite this cold weather. Salvino felt great — he was fiery and very excited to be here.

“We did most of the things on my terms, and some of the things on his terms — but like any good relationship, it’s all about compromise, and he feels great,” added Lyle of Salvino, whom she rode on the silver medal USA team at the Tokyo Olympics.

Earlier in the day, the 35-year-old German rider Frederic Wandres rode Hot Hit OLD to a career high score in the CDI3* FEI Grand Prix, presented by Barnwalkers — the qualifier for Saturday’s Grand Prix Special. All five judges placed the pair first, awarding 75.348% overall, improving on their previous best by over 1%.

“The consistency of the test today was the winning thing,” said Wandres. “He had not been out since August, so he has had a bit of a break, but he came back very good and my feeling was strong.

Wandres has ridden Hot Hit at Hof Kasselmann, where he works, since the grey gelding by Blue Hors Hotline x Diamond Hit was six. The now 12-year-old already has an impressive resume, and this victory took his unbeaten streak to five.