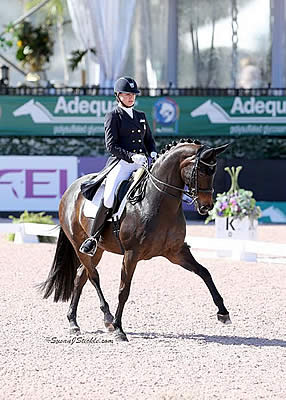 Wellington, FL – February 11, 2017 – Week five at the Adequan Global Dressage Festival concluded its fourth day of competition on Saturday, February 11, with another win for Adrienne Lyle (USA) and Horizon in the FEI Intermediaire 1 Freestyle CDI 3*, presented by Engel & Völkers.

Adrienne Lyle and Horizon, a 2007 Hanoverian mare (Hotline x Don Schufro) owned by Elizabeth Juliano, took home another victory, this time in the FEI Intermediaire 1 Freestyle CDI 3*, presented by Engel & Völkers, with a score of 75.325%.

“That was my first freestyle ever with her,” Lyle revealed. “We actually just kind of pulled this together last minute. I wasn’t aware that when we entered we also had to have a freestyle, so once we got here to the show I called some friends and Katherine Bateson Chandler lent me an old freestyle of hers. This was the first time I’ve actually ridden through the whole thing. I was really happy and Horizon was really good and stayed right with me and was there for me, despite winging it.”

Lyle and Horizon were also winners of the FEI Intermediaire 1, presented by Engel & Völkers, in Friday’s competition.

Lyle has spent the past few years out of the international competition ring. Commenting on her return, she said, “I’ve been really missing it. It feels really good to get back out there.”

“I was very happy with Bailarino. Like I said before, he is not the most motivated horse and for the third day, he still had to work a lot, but he did his job. We had one short change in the three tempis, and that was the difference between the first and second placing.”

Peters joked, “I asked Adrienne to take it easy on me. I even pulled the age card since I’m twice her age, but it obviously didn’t work!”

Placing third in the FEI I-1 Freestyle, was Jane Cleveland (USA) and Monique, a 2009 Danish Warmblood mare (Temptation x Kaprice x Matador) owned by Cleveland, with a 72.750%.

Earlier in the day, Diana Porsche (USA) and Di Sandro, a 2003 Oldenburg gelding (De Niro x Gentina x Sandro) owned by Porsche, won the FEI Grand Prix 16-25 CDIU 25, sponsored by Diamante Farms, with a score of 71.535%. Second place was awarded to Anna Buffini (USA) and Sundayboy, a 1999 KWPN/Oldenburg gelding (Kennedy x Eezelma) owned by Buffini, with a score of 69.651%. Mathilde Blais Tetreault (CAN) and Utah rounded out the top three with a 65.907%.