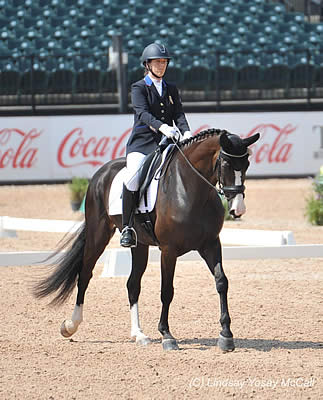 Wellington, FL – February 6, 2020 – Twenty-two horse and rider combinations competed at the 2020 Adequan Global Dressage Festival 3 CPEDI3*, January 21-24. Para-Dressage riders from Canada, Mexico, Republic of South Africa, and USA rode to top placings in the International Ring at the Global Dressage Festival in beautiful Wellington, Florida. In the Team competition, the Adequan® U.S. Para-Dressage Team, led by chef d’equipe Michel Assouline, earned the championship over Canada. The U.S. Team included Beatrice de Lavalette (Lake Worth Beach, Fla.) in Grade II riding Duna, a 12-year-old Dutch Warmblood mare she co-owns with Elizabeth de Lavalette and Nicolas de Lavalette; Rebecca Hart (Loxahatchee, Fla.), in Grade III, with El Corona Texel, an 11-year-old Dutch Warmblood gelding owned by Rowan O’Riley; Marie Vonderheyden (Wellington, Fla.) in Grade I and London Swing, an 18-year-old Hanoverian gelding owned by Eleanor Brimmer and Liza MacMillan; and Roxanne Trunnell (Wellington, Fla.) in Grade I and Dolton, an eight-year-old Hanoverian gelding owned by Flintwoode Farms LLC and Karin Flint. Trunnell also earned the individual championship with her 77.738% in the FEI Grade I Team Test, 78.572% in the FEI Grade I Individual Test, and the highest score of the show, a 81.878% in the FEI Grade I Freestyle Test, resulting in an overall of 77.699%. This was Trunnell’s second consecutive championship at the Global Dressage Festival in 2020. During the January 8-11, CPEDI3* Trunnell earned multiple scores over 81%. Taking home the reserve championship was Sydney Collier and the Hanoverian All in One, owned by Going for Gold LLC. Collier, also in Grade I, averaged a score of 73.384%. The US Para-Dressage riders have an intense year ahead as they prepare for the 2020 Paralympics in Tokyo August 27-31.

Champion Para-Dressage athlete Roxanne Trunnell noted, “Karin Flint’s Dolton was such a superstar at the ADGF 3 CPEDI3*. I was a little worried how he would handle another CPEDI so soon after the last one, but he handled it like a champ. On the first day we started off with another solid test, but I had gotten so excited about it while going down the final centerline that I was not as strong with my aids for the final halt, resulting in the halt not being square. The second day I could feel that the back to back shows were catching up to him and I just didn’t have as much horse under me as I usually do. I had to use a lot of leg during that ride, but it was once again a wonderful test and we nailed that final halt.”

She recalled her freestyle under the lights. “I love our freestyle and I think Dolton does too, so my only concern was that he didn’t get startled by the scoreboard like he did during the first CPEDI. He didn’t even give it any attention, so I was very very pleased with, since this was only the second time he’s showed under the lights.”

During the next few months building up to the Tryon CPEDI3* in June, Trunnell and Dolton will continue to show at the Global Dressage Festival National shows while training at Helgstrand Dressage.

Reserve champion rider Sydney Collier will also be attending the National Shows in Wellington following her successful CPEDI3* with All in One, owned by Going for Gold LLC. Collier expressed, “We were in the zone more than ever at this CPEDI3*. I am so proud of Alle for going into the ring at global and owning it. He is such a special horse in that he really takes any situation in stride and loves showing. I am so lucky to have found him and have had an opportunity to get him because of Georgina (Bloomberg, owner Going for Gold LLC). I don’t even have words to explain how grateful I am for all for these opportunities in Wellington that have opened up since all of these people have joined my team.”

Collier continued, “I had so much fun at this show. Honestly anytime I get to show any horse it is a blast but even more so with Alle because he is so special. He really looks forward to going into the ring. My trainer Katie Robicheaux and I have been working to master my geometry which was something I struggled with for years due to my vision. At this show my geometry was one of my stronger points but there is further room for improvement. I was also proud of our halts since in a walk test there are three of them and they weigh heavily on the total score. Alle is a great horse and I love his walk quality. A great walk was one gait that we searched hard for in each horse until we found him. It is a beautiful walk to ride in and out of the show ring. Horses are either born with a walk or they aren’t. It’s not a gait you can fix or create.”

Collier like Roxanne Trunnell is on her way as she aims at the Tokyo Paralympics. Collier added, “As Alle and I move along this pathway to Tokyo I remain dedicated to my goal of helping the US Team win the gold medal for America. Bringing this medal back to the USA would proudly represent every person who has stood behind the three horses and riders on their way to the podium. From the farrier, veterinarians, grooms, sponsors, support staff, to our Federation, the teams that stand behind each horse and rider are the dedicated individuals who make success possible for our country at the Games.”

Following the national shows at Global Dressage Festival in Wellington, Florida, Collier will head North to prepare for the summer.

Trunnell, Collier, and all of the U.S. international para-dressage riders aiming at the Tokyo Paralympics are looking forward to the next few months before selection of the U.S. Team and heading down centerline in Tokyo scheduled August 2020.