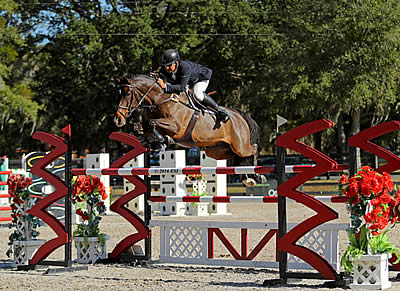 Ocala, FL (December 5, 2016):  Sunday marked the finale of the first week of the HITS Ocala Holiday Series, concluding with the $25,000 HITS Grand Prix. Exhibitors and spectators enjoyed a beautiful week to kick off the winter at HITS Post Time Farm with a swell of new features, including updated footing in Grand Prix ring and adjacent schooling area as well as other rings to emulate the very popular Ocala Horse Properties Stadium footing.

Thirty contenders vied for the top prize but only one horse and rider could take home the lion’s share over the course designed by Jerry Dougherty of Bokeelia, Florida.

The rider to beat proved to be hometown equestrian, Aaron Vale, who would not only take home the victory, but the second-place spot as well.

“Sunday’s course was a nice, balanced course with a good design and it gave a nice tour of the ring,” said Vale. “We’re happy to be here at HITS — the rings have always been very nice here and the footing in the Grand Prix ring felt great.”

Vale grabbed the top two spots with both mounts owned by North Face Farm, first place with Carlo, a 10-year-old Holsteiner gelding, and second place with Quality On Top, a nine-year-old Hanoverian gelding.

The nine-horse jump-off was challenging, and as none would go clear over the shortened course, it all came down to speed.

Vale and Carlo went first in the jump-off, and it looked as though they would lay down a clear round, but they were fooled by a rail at the final fence as the pair clocked in at 44.941. Vale’s second-place trip aboard Quality On Top would be in 45.649 seconds, also with only one rail.

Derek Petersen of Archer, Florida would come in third behind Vale’s two rounds piloting Diamant’s Legacy after stopping the clock in 46.048 with one rail at a mid-course vertical prior to the combination.

Flower Mound, Texas equestrian, Tracy Fenney, climbed her way from eighth place in Friday’s Grand Prix to score the fourth-place prize with MTM Reve Du Paradis, owned by MTM Farm in a 46.529-second round. This pair is no stranger to success in the Grand Prix Ring at Post Time Farm. Their success in this week’s Grand Prix is in addition to Fenney’s recent third-place finish in the $500,000 Diamond Mills Hunter Prix at the HITS Championship in September.

A talented group of Junior and Amateur riders turned out for the first feature Junior/Amateur-Owner class on the first Sunday of the two-week Holiday Series. Kady Abrahamson of Loveland, Ohio would come out on top of the leaderboard with Bugatti, owned by Abrahamson Equestrian, LLC, in a thrilling two-horse jump-off battle.

First to contest the shortened course was Waters aboard Idalle van Doperheide, owned by Chuck and Dana Waters. Waters and her mount powered through the course to turn in a cool, clear round in 40.546.

Abrahamason knew what she had to beat to take the lead. She flew to the finish leaving every rail in the cups. The time of the clock was 39.537; a second fast enough for the victory.