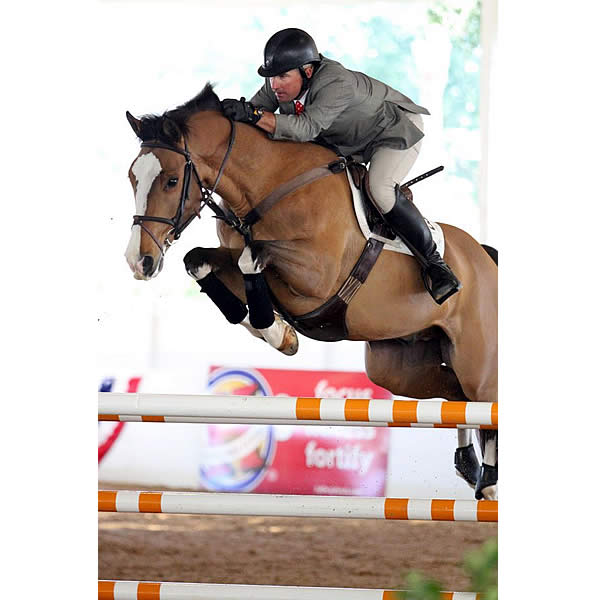 Aaron Vale guided Kryptonite to the 1.40m victory in only 42.398 seconds. Photo By: Kendall Bierer/PMG.

Tampa, FL – March 28, 2013 – The course was the talk of the day today at the Tampa Bay Classic, as each consecutive rider was faced with a technical track that tested the best of their abilities. Riders gathered at the Covered Arena early this morning, and the cold weather only added to the mounting anticipation as some of the nation’s top riders took their turn at the technical track in the Open Jumper classes at the Bob Thomas Equestrian Center at the Florida State Fairgrounds. Aaron Vale was one of the few riders to master the track, tackling the course with each of his mounts and taking away the victory in the 1.35m and 1.40m competitions.

Michel Vaillancourt of Canada was the course designer for today’s events in the Covered Arena, and he tested riders with a liverpool, vertical-oxer-vertical triple combination and an oxer-vertical double combination. The 1.35m and 1.40m riders were then asked to continue into the jump-off where they would be challenged by a number of tough rollbacks, tight inside turns and a snug time allowed as they took their turn at the short course. The track consisted of six obstacles including the opening oxer leading to fence two, a blue-and-white vertical, a tight left turn to the outside oxer where riders then had to quickly make a hard left rollback to take a skinny vertical, go through the double combination and finish over the liverpool set on the diagonal.

During the 1.40m Open Jumpers, only three riders were able to master the first course without fault. Aaron Vale and Palm Sunday, owned by Amen Corner Farm, were the first to continue into the speed round, accruing nine time faults in their attempt to control the course, and put accuracy above the risk of speed. They finished in a time of 53.842 seconds.

Greg Crolick and Landino were also up for the morning’s challenge. They easily navigated the first round, and moved into the jump-off where they met their four-fault score at fence 13. Although they kept to a speedy plan, a slow rollback put them over the 45 seconds time allowed. They ended with a total of two time faults, and combined with their prior four faults, eventually took the second place.

It was Vale who returned with a vengeance aboard Kryptonite, owned by Thinks Like a Horse of Morriston, FL, opting to take all inside turns and speedy rollbacks. Taking a chance, he sped around the course in 42.398 seconds, earning four faults in the jump-off, but sealing the victory.

“Kryptonite is a horse my wife has shown in the amateur jumpers for a year or two, and I took him over for a little while. He did a great job in Ocala, and we are working to further his education a little bit. He will probably go tomorrow evening, and Sunday, as well,” Vale described. “He is a very hot horse, and we are trying to figure out exactly what he needs. Sometime he gets a little wound up and loses focus, but he is starting to come around and become more consistent.”

Shortly after taking the blue in the 1.40m Open Jumpers, Vale rode Spray Tan, owned by Thinks Like a Horse, to the victory in the 1.35m Open Jumpers. He was the only rider to post a double-clear effort. Although Erin Haas and Casino van de Helle, owned by North Face Farm of Chelsea, MI, faced off against the eventual victors, two time faults stood in their way of the blue. Vale left all rails intact and crossed the finish in 42.902 seconds, well within the time allowed.

“He is a newer horse for us, and Mallory showed him in Ocala, and won some classes and had some good placings in some of the classes there. He was a little spooky in this ring yesterday, so I got on him to help knock some of the cobwebs out and get him going. He is a super horse, but then again, he is new for us, so we are getting to know him.”

Concluding the Open Jumpers today was the 1.30m Open Jumpers. The course changed as Vallaincourt continued to lay down a technical track. The class saw fierce competition as riders battled for the top slot. It was Vale who once again showed to the top of the leader board, this time with Zadermus, owned by Dasilva Investments of Ann Arbor, MI. The competitive duo was the last to attempt the course, and after leaving all the rails in their cups, they sped to the victory in the jump-off. Only three riders were able to move into the demanding short course, and none went without faults. Vale rode Zadermus to the fastest time, 29.181 seconds, finding fault at the second obstacle, a red-and-white skinny.

“He is a very quick horse, and he is quite young, too. He still needs mileage and all that. I am working on getting him in the ring,” Vale explained. “He has been doing a great job, and I am very happy with how far he has come along.”

Michael Hughes and Zammetje, owned by Christina Fried of New York, NY, posted a speedy time of 32.030 seconds, but when the final fence fell, they sealed their second place position. Deborah Connor and Jedi Warrior, owned by DC Sales & Entertainment, LLC of Reddick, FL, rode to the third place finish with four faults and a time of 36.969.

“I have been riding him for three years now, but he has really come so far since we bought him,” Michael Hughes explained. “The course was a little more technical than what they have been. We used today’s 1.30m as a schooling round, and we will be showing in the High Junior/Amateur-Owner Jumpers for the remainder of our time in Tampa. We are planning on doing the Welcome Stake tomorrow evening, too. He doesn’t have the biggest stride, but no matter where you put him, he always has enough jump to get out of it, I’m really happy with how far we have come.”

“This is my first year coming here; it is very laid back, and not nearly has hectic as the other shows,” Hughes concluded. “It is very exhibitor friendly, and offers a great change of venue.”

The first week of the Tampa Bay Classic holds numerous highlights for the jumpers. Tomorrow will introduce the Junior and Amateur-Owner Jumper divisions, seeing riders vie for the championship. Tomorrow night will feature the $32,000 Tampa Bay Welcome Stake beginning at 5 pm with the Welcome Party Cookout.