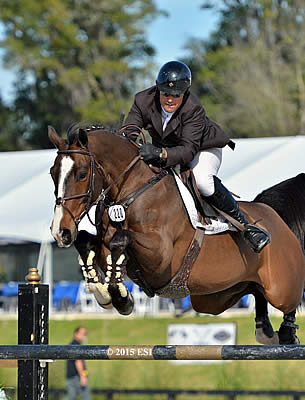 “I know if we leave the jumps up, he’s got a good chance,” Vale said of the 9-year-old bay gelding owned by Troy Glaus. Vale said the horse has a jumping style that’s “fairly extravagant – the way he kicks his hind end up and flicks his tail at the same time.”

Vale, of Williston, Florida, is a HITS Ocala regular, racking up numerous grand prix victories there, but this year the show circuit is attracting a lot more than just the regulars. Both the second and third place finishers, McLain Ward and Ian Millar, made the trip from Wellington, Florida to Ocala to ride in the $50,000 Equine Couture/TuffRider Grand Prix before returning back to the Winter Equestrian Festival.

Equine Couture and TuffRider provide top-of-the-line apparel, footwear and products, and the brands are proud to support top-of-the-line riders. “It’s exciting to be a part of the sport at its highest level,” Equine Couture and TuffRider President Timmy Sharma said. “We look forward to continuing to provide both innovative products and apparel and support for some of the world’s best riders.”