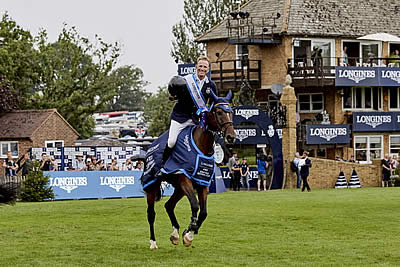 There’s a whole lot hanging in the balance as the Longines FEI Jumping European Championship 2019 gets underway in Rotterdam, The Netherlands next Wednesday (21 August). Not only will the best horse-and-rider combinations from all across Europe try to etch their names onto the prestigious Roll of Honour that dates all the way back to 1957. But the competition for the three Olympic qualifying spots up for grabs will also be ferocious, so it won’t all be about who stands on the top step of the podium.

Of course, when it comes to European gold, they all want it. And every two years when this event comes around then the ones they all have to beat are the Germans, because their record is just incredible. Germany has claimed the most team golds with a total of seven, and also tops the individual leaderboard with 14 victories. And with Christian Ahlmann, Daniel Deusser, Marcus Ehning, Maurice Tebbel, and the lady who took the individual title at last year’s FEI World Equestrian Games™ in Tryon, USA, Simone Blum, on call-up this time around, then the rest will have to be at the top of their game to keep them in check.

The very first FEI European Jumping Championship took place in Rotterdam, so we are returning to where it all began. Just 8 riders from 5 nations competed at that inaugural fixture in 1957, but a total of 70 athletes from 24 nations will line out in the 2019 edition, and 15 countries will be represented by teams.

The Irish are defending team champions, but few would deny that the Swedes, who finished second on their home turf in Gothenburg two years ago and who only lost out on gold at last year’s World Championships in a nail-biting jump-off against the clock, will be ones to watch this time around. They’re strong, they’re hungry, and they are on a roll, picking up a series of extraordinary wins in recent months thanks in no small part to sensational performances from Peder Fredricson, the man who brought individual European glory to his country in 2017. Fredricson spearheads an awesome Swedish side that includes Malin Baryard-Johnsson, Fredrik Jonsson, Henrik von Eckermann, and Evelina Tovek.

And the Swiss look a formidable force, Martin Fuchs and World No.1 Steve Guerdat, who took individual silver and bronze at last year’s World Championships, join Paul Estermann, Beat Mandli, and Niklaus Rutschi, and with their best horses in tow you just know they mean business.

It was a golden era for the Dutch when they swept all before them at Aachen (GER) in 2015, and Chef d’Equipe Rob Ehrens, who himself won team bronze in Munich in 1981, sends out Maikel van der Vleuten who was on that 2015 winning side along with Bart Bles, Marc Houtzager, Doron Kuipers, and Frank Schuttert.

The Irish won against the odds last time around when the team was reduced to just three riders in the closing stages. And Cian O’Connor, who clinched it on that memorable night before going on to take individual bronze, is joined by 2017 team-mate Shane Sweetnam, the on-fire Darragh Kenny, Paul O’Shea, and Peter Moloney.

However, the surprise package could well be the British. They’ve been in the doldrums for quite some time now but their winning performance in the Longines FEI Jumping Nations Cup™ in Dublin last Friday was more than convincing. Chef d’Equipe, Di Lampard, has at last got a super-talented and totally committed pool of riders, and the emotional reaction from the relatively young but hardened veterans Scott Brash and Ben Maher who were on the last winning British side in Herning (DEN) six years ago said it all that day. There’s no doubt but that the British, team champions on five previous occasions, are back with a bang, and the side that will also include Amanda Derbyshire, Laura Renwick, and Holly Smith will be gunning for gold next week.

Ladies had their own Championship until 1973, and since they’ve been competing against their male counterparts, they have only twice broken the mould by taking the individual title. Alexandra Ledermann from France was the first to do it with the mighty Rochet M at Hickstead in 1999, and there has only been one other, Germany’s Meredith Michaels-Beerbaum who topped the podium with the great Shutterfly in 2007 at Mannheim (GER). All eyes will be on the reigning World Champion, Simone Blum, to see if she can extend the short list of lady winners.

While gold is the goal for many, those three tantalising Olympic qualifying spots will also be a major focus. So far 14 nations have booked their tickets for Tokyo 2020 – Japan, USA, Sweden, Germany, Switzerland, Netherlands, Australia, Ukraine, Israel, Brazil, Mexico, Canada, New Zealand, and China. Next week, however, 10 more teams will be trying to make the cut, because Austria, Belgium, Denmark, France, Great Britain, Ireland, Italy, Norway, Portugal, and Spain also have their hopes and dreams, and none are prepared to give up without a serious fight.

The Jumping action gets underway on Wednesday and following two more days of competition on Thursday and Friday the team medals will be decided. Sunday’s finale is bound to be a thriller as the new Longines FEI Jumping European Champion will be crowned, and by then the road to Tokyo 2020 will be more clearly marked.