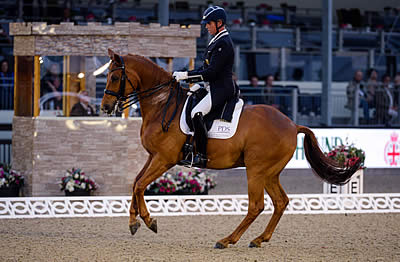 Royal Windsor Horse Show continued in style with successful day for the Home Nation. There was a Royal victory in the showing arena, a win for Team GB Olympic gold medalist Carl Hester MBE in the CDI4* Dressage and success for local rider Laura Mantel in the Show Jumping.

It was a British one, two, three in the International FEI Dressage Grand Prix supported by Horse & Hound at Royal Windsor Horse Show. British maestro Carl Hester led the winning trio, taking a comfortable first place with Barolo, a compact chestnut Hanoverian, standing barely more than 16hh, almost 8 inches shorter than Carl’s last Windsor winner, Nip Tuck in 2015. It was a first competitive outing for Carl and Barolo, who has been ridden to date by joint owner Charlotte Dujardin. Carl and Barolo gained over 74% in the 12 string class.

“He was bought by his other owner Anne Seifert-Cohn as a six-year-old and has been a bit of a project for us,” said Carl. “He got to the level quickly as he is smart, but needed time to strengthen up. I wasn’t sure whether doing my first test on him at Windsor was brave or stupid, but he did some lovely work out there tonight.”

Gloucestershire based Hayley Watson-Greaves produced an expressive test from her black gelding Rubins Nite to stand second. “He loves the atmosphere here and really rises to the occasion,” said Hayley. The pair, who has just come back from Hagen, now head to Compiègne as part of the British Nations Cup team.

Third placed Gareth Hughes and Don Carissimo also had a good prep for Compiègne taking third place in only their second outdoor Grand Prix. The Don Crusador gelding came to Gareth last August and this is the 12-year-old’s first season at the level. “He tries his heart out and never lets you down, even when he has a shock like he did tonight when going into that arena and he saw the screen,” said Gareth.

It was also a first competitive Grand Prix in the UK for New Zealand’s leading rider Wendi Williams and her own De Niro gelding Deja Vu MH. The pair is staying for a few months, having travelled back with the European horses from the World Cup in Omaha, where they suffered a massive disappointment having to be disqualified after Deja Vu MH bit his tongue.  “This is an amazing Show and that was quite an electric atmosphere out there,” said Wendi who acquired the New Zealand bred gelding as a foal. “I am really looking forward to tomorrow night; it’s a fantastic opportunity to finally ride our freestyle.”

Her Majesty The Queen’s homebred former racehorse, Barber’s Shop, again produced a foot-perfect performance with producer Katie Hunnable-Jerram, standing top of the 22-strong National Hunt section of the hugely-popular Retraining of Racehorses Tattersalls Thoroughbred Ridden Show Horse class, and then taking the section title. The success earns the consistent 15-year-old a place in the new Royal Windsor Supreme Ridden Showing Championship sponsored by Dodson & Horrell, which takes place on Sunday afternoon in the Castle Arena and offers £750 to the winner.

Other showing classes were well supported too, and the coloured horse and pony sections bloomed with quality as well as quantity. Jayne Ross’ yard continued its purple patch when Miranda Wallace scored her first Royal Windsor victory and then landed the ridden section championship with her new purchase, Volatis Orianna, winner at the Royal International last year with her previous rider, Jo Bates.

It was a successful day for local rider Laura Mantel, who not only stole the show in the Land Rover Grades A & B Jumping Competition, but also finished equal first in the Olympic Star Spotters Competition sponsored by Suregrow Fertiliser Ltd.

A total of 43 combinations started the day’s most prestigious Show Jumping class, the Land Rover Grades A & B Jumping Competition, with 11 horses jumping the 1.40m course clear to go through to the jump-off. With notably fast riders through to the second round, speed was the aim of the game, with the quickest round coming from Ireland’s Trevor Breen; however, a fence down kept him from pole position. Keeping up the pace was Berkshire’s Laura Mantel, who produced a faultless round to take the victory in a time of 40.98 aboard the aptly named Glory B V. Lauren Edwards and Ben Walker both put up an excellent challenge, but their times of 41.90 and 42.42 were only good enough for second and third position, respectively.

Speaking after the class, Laura said, “It’s absolutely amazing to win at Royal Windsor. I’ve been second here several times over the years, from Showing when I was a kid, to the B & C Jumping a few years ago, but she jumped amazingly today; it’s so brilliant.”

Later in the day, attention turned to the future champions of the sport, with the Olympic Star Spotters Competition for six-year-old horses, sponsored by Suregrow Fertiliser Ltd. With the class aimed at producing the next generation of top horses, a double-clear was all that was required to secure equal first place. Of the 16 riders clear in the first round, 14 secured that all-important second clear, including crowd favourite William Funnell, who was riding the homebred Billy Rhodes, and Japanese rider, Yoshiaki  Oiwa, fresh from finishing eighth at Badminton Horse Trials last weekend.

Current World Horse Four-In-Hand Champion, both indoors and out – Boyd Exell from Australia – was awarded first place by each of the five dressage judges in the first phase of the International Driving Grand Prix. This gives him a clear six-point penalty lead over his closest challenger, Theo Timmerman from the Netherlands, putting him in prime position to record his eighth win at Royal Windsor. Timmerman, a previous European Champion and a long-standing member of the record gold medal winning team from Holland, is a regular competitor in the Land Rover International Driving Grand Prix but has yet to come home in first place. 22 horse fours competitors from nine nations will battle it out over the cross-country marathon course, which includes eight formidable obstacles, on Saturday before the final cone driving course on Sunday.

In the pony four-in-hands the field is led by Jan de Boer from the Netherlands driving his team of Welsh ponies. Last year’s winner, when he claimed his sixth Royal Windsor title, de Boer has a narrow lead of less than two penalties from Jacqueline Walter of Germany. GB’s National Champion, Sara Howe, is the highest placed British competitor in sixth place.