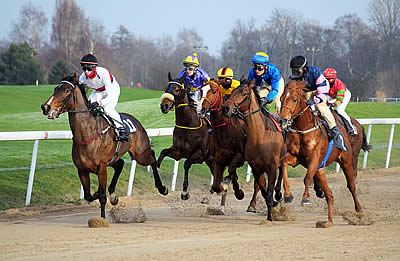 Racing is big business in the UK, and while the Grand National might be the most famous event in the National Hunt racing calendar where betting is concerned, the Cheltenham Festival beats it in terms of sheer entertainment.

The festival takes place over four days at Prestbury Park, a picturesque racecourse just outside the usually quiet and quintessentially English town of Cheltenham, close to the English and Welsh border. Every March, thousands of racegoers take over the town to witness 28 top class races, culminating in the prestigious Cheltenham Gold Cup at 3:30PM on the final day.

One of the most compelling factors of Cheltenham is that it is not just a race between horses. There is also national pride at stake between the English and the Irish. Every year, there is an informal battle to see which country can scoop the most trophies. In particular, look out for two of the most famous trainers from either side of the Irish Sea.

Willie Mullins is from an Irish family that has been riding, breeding and training horses for generations. In 2015, he set a festival record with eight of the 28 winners.

However, when it comes to overall festival wins, even his record is surpassed by English trainer Nicky Henderson. He has been in the business for 40 years, and has been particularly successful at Cheltenham.

The battle between Mullins and Henderson is one of the most intriguing sideshows in British horseracing, and it all comes to a head at Cheltenham.

So much for the trainers, then, but what of the horses? With four days, 28 races and literally hundreds of entrants. It is little surprise that an estimated £500 million ($700 million) will be bet trackside and online in the days up to and including the festival. For the casual observer, it can be hard to know where to start, which is why we have asked the tipsters at Cheltenhamfestival.net to single out the pick of the festival runners. There are certain to be a few surprises along the way, but here are their picks for some of the top races, whether you are looking to back an outright winner or an each way shot.

Last year, Nicky Henderson’s Buveur D’Air was an outsider who won the race in relative comfort. This year, the horse has gone from strength to strength, and the bookmakers have him as odds-on favorite to retain the trophy.

Another from the Henderson stable, My Tent Or Yours, came in second last year. This was the third time in four years he had done so, and at 16/1, racing fans are already queueing up to place their each way bets.

Going into Ladies’ Day and it’s three for three for Nicky Henderson from our expert tipsters. Altior has been unbeatable in his recent outings, with an amazing 11 straight wins, dating back to October 2015. The bookmakers have him at even money to make it a round dozen.

The outsider to watch is Great Field. He is the first Willie Mullins horse to get a mention and is also in winning form.  There’s every chance he could pull off a surprise, and is certainly in with a good chance of placing.

This could be one of the most closely fought of the showcase races, but Sam Spinner, trained by Jedd O’Keefe, is the bookmakers favorite. However, our tipsters fancy Nicky Henderson’s L’Ami Serge as the archetypal dark horse, who could easily pull off a surprise win.

Gold Cup
To win – Might Bite
To place – Native River

The romantics might fancy last year’s winner Sizing John, but for the realists, it’s Henderson all the way. Might Bite looks like the class of the field and will be tough to beat.

Outside the main combatants, Native River is coming into form at just the right time. He came third last year and is well capable of doing so again.