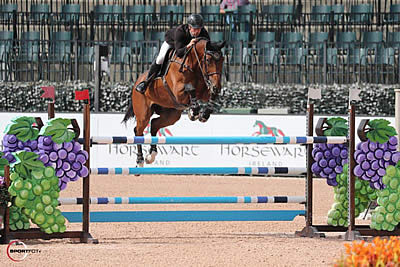 The course set by Michel Vaillancourt (CAN) saw 29 horse-and-rider pairs attempt the first round, with 12 entries returning for the short-course test. Early in the order of go, Garza and the 2001 Belgian Warmblood gelding (Jetset-D x Skippy) owned by David and Monica Garza put in a blazing clear performance that couldn’t be beaten.

“My horse jumped beautifully, and it was a really, really special class because it was his last class in the U.S.,” Garza revealed. “Bariano gets retired in two weeks in Mexico, so this is a nice way to finish his career in the U.S. It was a fun class, and the course designer did a great job, I thought.”

Garza, who has partnered with the now-17-year-old gelding for many years throughout his development as a rider, emphasized how much he owes Bariano: “My relationship with him has been everything. He took me from children’s jumpers to where I am now, and he’s an amazing horse. I’m not usually emotional, but it’s nice. I owe everything to him, but he owes me nothing.”

Of the many memories Garza has with Bariano, including competing across the globe at the FEI level, Tryon in particular holds a special moment, he explained. “I have to say the 5* last year here in Tryon was pretty special with him,” Garza recounted of his second-place performance in the $380,000 Rolex Grand Prix CSI 5* just over a year ago at TIEC. “For a horse I started with in the children’s jumpers and [to end up on the podium in that class] with him as well – that was really special, and is one of my fondest memories of him.”

As he looks ahead to competing in the Tryon Fall 4 CSI 5* next week before returning to Mexico, Garza will be partnering with another mount, but Bariano’s job well done for Garza over the years will remain front and center.

After a week of ups and downs, Garza was thankful to conclude the Tryon Fall 3 CSI 3* week on such a positive note, he explained. “Well, I fell off yesterday on a green horse, so today is a great improvement from yesterday! That’s just horses for you. One day you lose, and one day you win, and you take it as it comes. Today we celebrate, and I’m thankful I have this special horse with me.”

“MTM Making Waves is a First Year 3’6″ Green Hunter, as they call them,” Shepherd explained. “I’ve had him with some customers for a couple of years and showed him as a Pre-Green horse. He’s won a few of these derbies, so I’ve got some faith in him by round two. He was really good and he’s a special horse. He has a giant step.”

For a hunter, there are a couple distinguishing factors about her mount, Shepherd noted. “He’s a little strong-willed, and I’m not sure that’s my favorite thing about him,” she joked. “His look in the ring is so beautiful that when I walk in the ring I feel confident and people are like, ‘wow!’ That is probably my favorite thing about him. He wows the judges when he walks in, so I always feel like I’m starting a little ahead on that one, which is nice. I look the part.”

For full results from the $10,000 USHJA National Derby, click here.