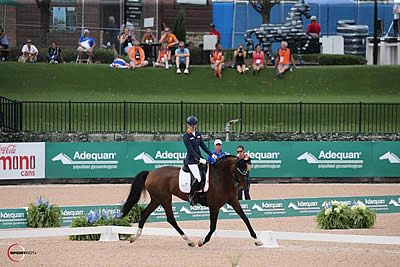 “I am really thrilled,” Van der Horst said. “It is so amazing to be world champion again. During my test, I didn’t realize it was that good.

“I was just riding my test and doing what I do and it was not until afterwards that I realized it was good. In the beginning I was nervous, but I relaxed during the test and it got better and better. It’s our first international competition together and I am so proud of her.”

Baker, a mainstay of Britain’s all-conquering Para-Dressage teams in recent years, was similarly delighted with the performance of her horse in what was a major championship debut for the partnership, as it had been for Van der Horst and Findsley.

“She was amazing, so, so, good and she went in there like she owned it,” Baker said. “I am just so proud of everything that we have achieved in such a short space of time.

“It is an honor to get called up for the team, especially after such a short space of time. I’ve only had her since January, and to have done everything we have and for the selectors to have the trust in us to come and do our best is fantastic.”

Italy’s Sara Morganti came out on top in the Grade I Individual Championship, winning an anticipated head-to-head battle with Singapore’s current world number one Laurentia Tan.

The pair was drawn as the last to two to ride in Tryon Stadium, and did not disappoint, with Morganti’s score of 74.750% on Royal Delight enough for victory as Tan and Fuerst Sherlock finished on 73.750%. Germany’s Elke Philipp claimed the bronze medal aboard Fuerst Sinclair with 73.143%.

“It was wonderful,” said Morganti, who won world Individual Gold and Silver medals in 2014.

“It’s incredible. I’ve had a very difficult year because of health problems and for a moment I thought I couldn’t go on.

“My horse was amazing and I have to thank my trainers who have been with me all along the way. I am happy because I wanted to get a medal for me, but also for them.”

Tan, meanwhile, added, “It’s really important to get a medal for my country. I felt relaxed and I just had to keep going.”

Philipp could scarcely believe the scale of her achievement as she completed the medal podium.

“I can’t have any words for this,” she said. “I hoped that I would win a medal, but now I have a medal! The arena is perfect for me and my horse and I think we did a good job.”

The 25-year-old Bendixen, ranked in the world’s top ten, danced to victory and credited her long-standing partnership with black gelding Klintholms Ramstein and lunger Lasse Kristensen for the success. She won her first European Bronze medal with the same duo seven years ago in 2011.

“One stand was a bit shaky, but I just continued and smiled,” Bendixen said, earning top score for the Trakehner breed horse Ramstein, owned by her groom.

“We call him the psycho mouse. He loves the arena and always says ‘Here, look at me!’ I wanted to dance my emotions at this WEG, relaxation, power, elegance, harmony – everything should be in it,” Bendixen said.

“I had warned her that there is nothing more difficult than really dancing on a horse, not only with expressive hands, but also with your feet and she did it,” Kristensen said, a former world class Vaulter himself.

Janika Derks scored 9.473 for her technique, the best of the morning. For her Freestyle she used the music “La Terre en Ciel” that had already brought a Bronze medal on ice, dancing for Germany.

“I wanted it to look easy, soft and fluffy, quite a contrast to my usual vaulting. I am a very technical and strong vaulter and to show elegance and harmony is the hardest for me,” Derks said.

“It is always the same, the easier something looks the harder it is,” Derks’ lunger Jessica Lichtenberg said.

“I am kind of an upbeat person and I had to pretend to be afraid which is not quite like me. The panic of the wolf is more like the panic of the vaulter of not finishing on time.”

That fear was unnecessary because she finished on rank 7, with lunger Christoph Lensing, a double WEG Silver medalist himself.

Germany’s Thomas Brüsewitz won the Individual Freestyle at Christie’s International Real Estate’s Vaulting discipline at the FEI World Equestrian Games™ Tryon 2018 on Wednesday, duplicating his success from Tuesday’s compulsory. Vaulting for a score of 8.987, he kept France’s Lambert Leclezio and Jannis Drewell for Germany at bay.

It was fireworks in the arena when world No.3, Brüsewitz did his Freestyle following the theme of the movie “The Truman Show.”

“The person in the show is a star because he is true to himself, a real person. Our vaulting is true as well. I thought this a fitting theme for the world championship here.”

Brüsewitz did not go the limit and kept it safe, omitting one handstand.

“When I had my signature movement out of the way, the flic flac backwards, I felt I should play it safe. I will keep it up my sleeve for the final Freestyle,” the student at a sports university in Cologne, Germany said.

FEI World Cup™ winner Jannis Drewell “danced with wolves” for his Freestyle, collecting 8.924 with four scores of 9 from the judges’ panel.

“I had this theme ten years ago for my very first national youth championship and I thought it was a good moment to come up with it again. It was much better than ten years ago.”

French Lambert Leclezio was not happy with his performance, finishing on 8.832.

“Two big movements did not go to plan, but maybe people on the outside did not notice.”

The sparkle of 15,000 rhinestones lit the Indoor Arena in the Christie’s International Real Estate’s Vaulting competition at Tryon 2018, when the world’s best pair met for their first round of Freestyle.

Austria’s Jasmin Lindner and Lukas Wacha look set to defend their WEG title from 2014. They scored an average of 9.138, topping their Freestyle performance at WEG 2014.

Wearing a black-and-white costume, they interpreted the theme of the literature piece Chess Novel. It was the first time the freestyle was shown in public. It has been a work in progress since they started planning it two years ago.

“It was a wonderful feeling to go out and to know it will stun everybody. When you then get it all together at the right time the feeling is just hard to describe,” said Lukaas Wacha.

Their costumes had been handcrafted by both of their grandmothers, who are tailors in Vienna and Salzburg. It had been Jasmin Linder’s job then to attach the close to 15,000 rhinestones.

The world’s highest ranked pair Italy’s Lorenzo Lupacchini and Silvia Stopazzini set the tone for a great competition. Vaulting as a pair for two years, they came out first into the competition and vaulted for a 9.057, earning six scores of 9s.

Breathing down their necks, only 0.001 point behind, are Germany’s Janika Derks and Johannes Kay. Her neon pink costume stood out against horse Dark Beluga when they showed their stunning lifts and elevations, defying gravity.