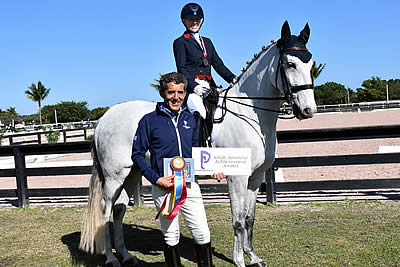 Wellington, FL (March 3, 2017) — February was full of exciting events for Dr. Cesar Parra and his elite team at Piaffe Performance Farms, who have been winning top scores and giving out awards at the world-class Adequan Global Dressage Festival in Wellington, Florida.

In week 7 of the competition, Dr. Parra earned two scores above 80 percent on Don Cesar, a Westphalian gelding by Desperados x Manhattan. Together, the pair won all three FEI Young Horse classes for 7-year-olds. Dr. Parra and his wife Marcela have a special affection for Don Cesar, having known the horse since he was born and owned him since he was a 3-year-old. Their goal for this stunning chestnut is to qualify for the 2017 World Young Horse Championships in Ermelo, the Netherlands later this year.

“Don Cesar has matured a lot in the last year,” says Parra. “His gaits are getting even more expressive and elastic, and he is more confident in his job. He has so much talent for collection, while keeping the suppleness and thoroughness in the back; it is amazing. He is powerful and sensitive, but always is trying to do what you want. He is a fast learner and very reliable. He always stays on your side, and he loves all the collected movements.”

Another promising Piaffe-Performance favorite is Belle Ami, an 8-year-old Westphalian mare (Belissimo M x Reebook) owned by Parra, Brooke Centrella and George Feldman. Belle Ami had an outstanding February at AGDF winning one of the USEF Developing Prix St. Georges classes with 74.411 percent and placing second in another with 73.456.

Through the Piaffe Performance Adult Amateur Achievement Award, Parra also honors exceptional adult amateur riders who compete at the upper levels of the sport and are role models, showing particular dedication and skillful riding. In February, the award was given to two riders: Michele Roark and Helle Goodrich. Both women received a ribbon, a commemorative engraved photo frame and a medallion.

Michelle Roark, a U.S. Dressage Federation bronze medalist from Wellington and Chicago, rides her Cesar HHC, a gorgeous 10-year-old grey Lusitano gelding, at Prix St. Georges. “This horse was bred for me,” Roark remarked on Cesar HHC. “My favorite thing about him is his mind. He has the best mind. He’s the horse of a lifetime.” Roark has been riding for about 10 years and is devoted to the Lusitano breed. “My advice,” she says, “is do not quit. Come out every day, give your horse the benefit of the doubt, be kind to him and realize that each horse will teach you something.”

Helle Goodrich trains with top dressage professional Silva Martin in the winter and is riding her Fürst Rubin, a 13-year-old Westphalian gelding recently imported from England. This was only their fourth show together, but the pair had an outstanding day, scoring 70 percent at Third Level. “He is fantastic to ride and very patient with me,” says Goodrich, smiling and full of emotion. “My horse just gives me joy every day!” She says her goal is to have a lot of fun and keep improving and hopefully climb the levels.

Piaffe Performance will continue to give out the award for the duration of the Adequan Global Dressage Festival, which runs through April 2, 2017. Dr. Cesar Parra is an Olympian and U.S. Pan American Games Team Gold Medalist who has also represented the U.S. in the 2014 World Cup in Lyon, France.