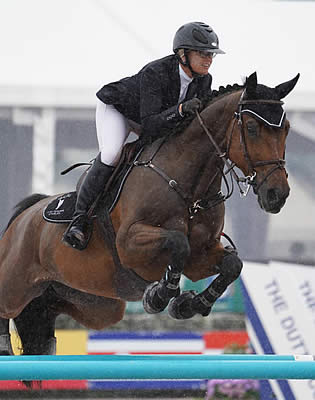 Wellington, FL — March 20, 2019 — The penultimate week of the 2019 Winter Equestrian Festival (WEF) got off to a wet start on the morning of Wednesday, March 20, when Erynn Ballard (CAN) and Ilan Ferder’s Ceitasi took the win in the $6,000 Bainbridge 1.40m class. Out of an original field of over 100 horse-and-rider combinations, only 86 entries elected to contest Olaf Petersen Jr.’s (GER) course after significant weather issues forced the class to be moved to the Global International Ring at Equestrian Village.

The Wednesday class at WEF was held in a one-round speed format due to the large volume of entries and 17 of the 86 came home fault-free. Tiffany Foster of Canada took the early lead aboard Artisan Farms, LLC’s Galino when she put in the first clear round with a time of 71.23 seconds; she ultimately ended in 14th place at the class’s completion. Harrie Smolders (NED) also went early in the class and shaved nine seconds off of Foster’s time to end on 62.598 seconds with Copernicus Stables, LLC’s 11-year-old KWPN mare (Oklund x Orrada), Corrada. The performance held strong and the pair finished in third place overall. Only several trips after Smolders, Chris Pratt (CAN) laid down a time of 62.49 seconds with Caron Stucky’s 12-year-old Oldenburg gelding (Larino x Paguera), Luigi, which was good enough to earn the second place finish.

Ballard was the first to return after the drag break with her second mount of the day, the nine-year-old Westphalian mare (Caratello B x Ceitas), Ceitasi, and crossed the timers in 58.55 seconds. After shaving four seconds off of the previous top time, it was clear the new combination was unbeatable.