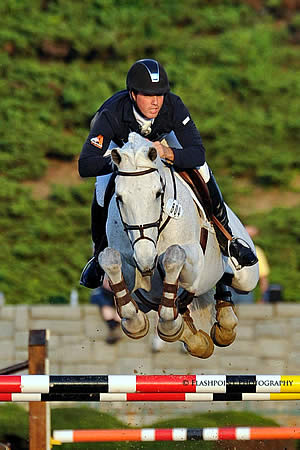 Alex Granato and Gangsta sail over the oxer in the Olympic Stadium en route to the win in the $35,000 Outback Steakhouse Grand Prix. Flashpoint Photography.

It was not an easy walkabout as the top twenty-seven jumper riders tackled the course designed by Manuel Esparanza of Mexico at the Georgia International Horse Park during the $35,000 Outback Steakhouse Grand Prix during the Atlanta Summer Classics.  Only six were invited back for the jump-off and it was Alex Granato of Elizabeth, Colorado and his own Gangsta who took the win with a double-clear effort in a time of 34.605 seconds.

Christi Israel of Birmingham, Alabama in the irons aboard her own Bull’s Run Zino Platinum turned in the first clear round of the class with a double-clean time of 72.440 which was under the 75 seconds allowed.  The time allowed would definitely weed riders out of the class and 10 would accrue time penalties in the first round.  As the first to go in the jump off, their time of 36.935 seconds was well in line with the time allowed of 56 seconds, but their rail down at fence 9A would cost them four faults and eventually land them in fifth place overall.

Derek Peterson of Archer, Florida and his own Via Dolorosa followed Israel in the class and were next to go double-clear with a time of 71.292 seconds in the first round.  In the jump off, the team had a rail down at fence 8, resulting in four faults in a time of 36.181 seconds which would place the duo in fourth position overall.

Hennessey, owned and ridden by Chasen Boggio of Canton, Georgia, went clean in the first round and turned in a time of 74.145 seconds, just below the time allowed.  But their faults in the jump off at fence 9A in a time of 38.873 seconds would finish them in sixth place overall.

Aaron Vale of Williston, Florida and 2VR Showjumpers’ Zippo II were next to go and looked to go clean, but their time of 75.033 seconds would earn them a time fault and the pair would finish in seventh overall.

Harold Chopping of Southern Pines, North Carolina rode Patty Ann Burns’ Calando Z to a clean round, but also earned one time fault with their time of 75.934 seconds which would find the pair finishing in eighth place overall.

Alex Granato of Elizabeth, Colorado and his own Gangsta were the next to turn in a clear first round effort in a time of 73.866 and carried that momentum to the jump-off round where they turned in the first clear round and set the time to beat at 34.605 seconds.  There were two to go and the competition was stiff with seasoned veterans Vale and Francis Land waiting in the wings.

Vale was next to tackle the course with Spirit of Alena owned by Campos and Miranda Investments and turned in a clear 71.208 first round effort.  Although he looked to take the lead from Granato in the jump off, Vale’s time of 35.180 seconds, despite the clean effort, would leave the duo in second place.

Francis Land of Alpharetta, Georgia in the irons aboard his own Vieanne was next to go and turned in a clear first round effort of 74.255.  Despite their clean jump-off round, their time of 35.570 seconds would not be fast enough to catch Granato or Vale and would land them in third place overall.

Week II of the Atlanta Summer Classics kicks off tomorrow when the complimentary Zone 4 Clinics get underway at the Georgia International Horse Park.  Tomorrow features accomplished judge and horseman Bob Crandall who will lead a general horsemanship riding clinic in the covered arena.

On Tuesday, June 18, the Zone 4 Complimentary Clinics continue and will feature legendary Steve Stephens, Olympic course designer, who will conduct a water jump clinic.  Stephens will teach you and your horse how to jump an open water element. This clinic will be filled on a first come, first-served basis for 15 riding participants.  Auditors are welcome to attend.

Then, the inaugural USHJA Children’s/Adult Jumper Zone 3/Zone 4 Championship takes place where riders compete in a Nations Cup format.  The first round is scheduled for Thursday, June 20th and the final round takes place Sunday June 23rd.  The $2,500 USHJA National Hunter Derby Classic presented by FarmVet takes place Week II as well as the Emerson Burr Program for Pony Riders.  The $15,000 Welcome Class, the $10,000 Pony Hunter Derby Classic, the $5,000 Future Class and the $35,000 Grand Prix all provide ample opportunity to cash in on the competition.  The $2,500 TAKE2 Thoroughbred Hunter and Jumper Division, the Atlanta Cup Equitation Classic, the World Hunter Champion Hunter Rider, the Grand Puba Junior Hunter Championships and the Freestyle Equitation Classic will all be featured next week in addition to the traditional Classic Company classes.  No wonder these are the two most popular weeks of show jumping!

If you don’t have stalls, be sure to call the show office ASAP.  With a handful of stalls left and a fistful of events and prize money up for grabs, the Georgia International Horse Park and the Atlanta Summer Classics are the place to be!  But if you can’t get in this week-no worries!  Charleston Summer Classics are right around the corner and Classic Company has combined the beach and the show ring to make for the best horse show experience ever!

Anyone who has shown with the Classic Company knows what sets them apart from the rest:  Classic Shows are FUN!  Complimentary exhibitor parties, luncheons, Saturday pizzas and the friendliest show management team anywhere work hard to make your showing experience the best.  Classic Company never charges an add or scratch fee for those last minute changes and there is no office fee added for credit card payments.