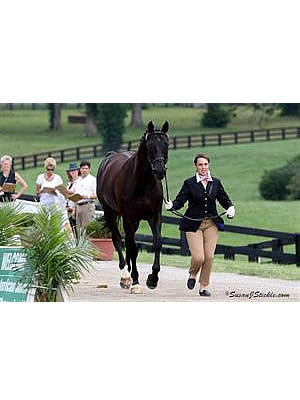 Lexington, Ky. – Tuesday evening’s Opening Ceremonies marked the exciting start of the 2015 Adequan/FEI North American Junior & Young Rider Championships presented by Gotham North (NAJYRC). The Organizing Committee is pleased to announce that 222 entries are set to compete in the championships, which run July 14-19 at the Kentucky Horse Park in Lexington, Ky.

Of the 76 riders set to compete in the USDF/Platinum Performance North American Junior and Young Rider Dressage Championship, 41 will vie for medals in Young Rider competition, with 35 lining up in the Junior championship. Teams will be competing from nine regions of the United States, from Mexico, and from the Canadian territories of Quebec, Ontario, New Brunswick, British Columbia/Quebec, and British Columbia/Alberta.

Two Canadian and nine U.S. teams are set to go in the USEA North American Junior Eventing Championship. Four individual riders will stake their claim on Young Rider excellence in the CCIYR2*.

A field of 16 riders is set to race in the North American Young Rider Endurance Championship, with one Canadian and three U.S. teams composing team competition.

New to NAJYRC this year, the North American Young Rider Para-Dressage Championship has a U.S. and a Canadian team, with 6 individuals hoping to claim top honors.

Stay connected with all the action at the 2015 NAJYRC at usefconnect.com/najyrc.

Tune in to the USEF Network starting at 7:00 a.m. ET on Saturday, July 18 to see the live stream of these rising stars in the sport.