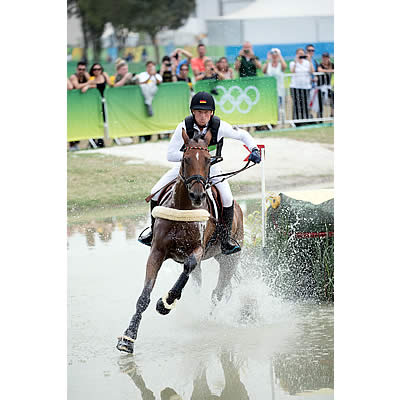 Can anyone break Germany’s firm grip on the FEI European Eventing Championships? That is the question as riders, horses, owners, grooms and trainers from 19 countries, plus a host of volunteers, have been welcomed to the first senior Eventing championships to be held at the Stragona Equestrian Center in Strzegom (POL) from August 17-20 and the first one in Eastern Europe since Bialy Bor (POL) in 1986.

The German team is bidding for a fourth successive European team gold medal and world number one Michael Jung, whose extraordinary winning run began in Luhmühlen (GER) in 2011 with the great La Biosthetique Sam, will again be one of the favourites to take the title and, in the process, make Eventing history.

The Jung story continued to Malmö (SWE) in 2013, where he triumphed on Halunke, and then in 2015 he produced an unforgettable display of horsemanship on fischerTakinou, galloping through torrential rain at Blair Castle (GBR) in the Scottish Highlands to equal Ginny Eliot’s (GBR) record of three successive titles on three different horses and receive team and individual gold medals from HRH Queen Elizabeth ll.

Now he will be trying to make history on Polish soil, and few would bet against him making it four in a row with fischerRocana FST, known as ‘Roxy’. The brilliant little mare is a dual winner of Kentucky CCI4* and won world team gold and individual silver medals at the FEI World Equestrian Games™ in Normandy (FRA) in 2014.

Joy of the sport

However, nothing is ever predictable in Eventing – that is the joy of the sport – and the name that has been on everyone’s lips this summer is Frenchman Thomas Carlile on the beautiful grey stallion Upsilon, a horse that is hugely talented in all three phases.

Last year at the Rio Olympic Games, the French beat the Germans to team gold and they come to Strzegom on a wave of confidence. They may be missing the Olympic silver medallist Astier Nicolas, who is injured, but France fields riders of the calibre of Maxime Livio, currently ranked fifth in the world, and 2015 individual bronze medallist Thibaut Vallette. Remarkably, France, so often the silver medallists, have never won the European team title, but they must surely feel the tide is about to turn.

Great Britain have dominated the European Championships for many years with an unbroken winning run of eight titles from 1995 to 2009, and will be equally determined to regain their place at the top of the leaderboard, as will their new team trainer Christopher Bartle who helped Germany to three Olympic golds and multiple championship medals.

The British squad is headed by Kristina Cook (Billy the Red), for whom it is an eighth European appearance. She is the only mother to have taken the European title, which she did convincingly in 2009 on Miners Frolic in Fontainebleau (FRA).

There will be teams from Spain, Italy, Russia, and, for the first time in decades, Norway, coached by the great Finnish rider Piia Pantsu-Jonsson, world bronze medallist in 2002.

History is waiting to be made – but who will be making it?