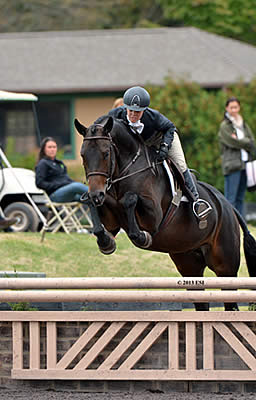 ©ESI Photography. Winn Alden and Esco on their way to the blue in the $10,000 Pre-Green Hunter Classic.

CULPEPER, VA (October 3, 2013) – With a prize money tag of $10,000, the Pre-Green Hunter Classic at HTS Culpeper attracted an impressive start list, but it was Winn Alden who captured top honors. Alden piloted Alexis Hale’s Esco to the blue after they posted the third highest score in the first round with an 85.5, and returned to dominate the second with an 88.

“He’s a show-off,” said Alden of the five-year-old gelding they purchased from Emil Spadone. “He looks to see if people are watching him, and the more people watching the better he is. It’s nice to ride one that wants to win.”

Alden was one of nearly 30 competitors to compete over courses set by Course Designer Rian Beals of Saugerties, New York. “He [Esco] jumped great,” she added. “His lead changes are sometimes challenging, but they were perfect.”

While Esco is bursting with potential, according to Alden, she was still surprised at how well he fared against stiff competition. With the start list including horses piloted by the likes of Laura Linback and Tracy Fenney, Alden couldn’t have been happier with how her young horse performed.

Jason Berry of Verona, Virginia finished second behind Alden after riding to an 85 in the first round and returning to post an 86 in the second aboard Frances Porter’s Limited Edition. In third, Jennifer Jones of Ocala, Florida rode Redfield Farm’s Clear Sailing to the second highest score in the first round with an 85.75 and returned to collect an 85.

Tracy Fenney of Flower Mound, Texas posted the top score in the first round with and 86. She returned to pilot Michael McCormick’s MTM Inquisitive to an 84 for fourth place. Jones returned in the fifth spot in the irons of her own Clouseau. They combined scores of 84.5 and 85.

With major improvements planned for HITS Culpeper over the winter, Alden who lives 45 minutes form the show grounds, admits that she won’t miss a minute of the action in 2014. “What HITS has planned is really exciting and we are looking forward to Culpeper in 2014 – it is sure to attract bigger numbers and more competition.”

Chopping and Howe’s 16.3, Danish-bred bay gelding Caramo led both rounds with an initial score of 177 to establish a commanding lead prior to the handy round. They returned to again dominate the second round with a score of 196. Their total of 373 firmly sat them at the top of the class and sent them home with the win.

“He is one of the most consistent, reliable horses I have ridden,” said Chopping, who has been riding Caramo for two years. “He’s just a great guy to ride. He can walk in any ring for the first time and jump well.”

Callan Solem of Glenmoore, Pennsylvania piloted Horseshoe Trail Farm, LLC’s Balladeer to second after a final score of 343, while Morgan Ward of Milford, New Jersey rode Redfield Farm’s Comissario to third after posting a 337. Paul Mathews of Somerset, Virginia was fourth aboard Terry Morrison’s Carino with a score of 332, while Even O’Donnell of Ringoes, New Jersey capped the top five on Finale Partners, LLC’s Loxley with a score of 326.

The final week at HITS Culpeper offered impressive prize money to both hunters and jumpers of varying levels and closed the 2013 circuit with an impressive bang. “We are really proud of this week. It stands alone as our biggest offering of prize money and special classes in Culpeper,” said HITS President and CEO Tom Struzzieri. “It’s a perfect stepping stone to the all-new Culpeper 2014.”